Home-Assembled Fruit Salad for Everyone! 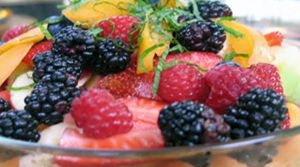 Oranges and grapefruit: (This doesn't include the little easy-peel pull-aparts, like tangerines or "cuties." You already know what to do with those.) This will be juicy, so keep a few towels handy for mopping purposes. Use a sharp serrated knife to slice (and then discard) the skin from the polar ends, and then from the sides. Hold the peeled fruit over a bowl, and cut with a sawing motion in and out along each membrane, releasing the segments directly into the bowl. Squeeze in the juice from the remaining membrane that's left in your hand after all the segments are released, and then discard the membrane, and spend a couple of minutes fishing out any seeds that you may not have already rejected. You now have an entrancing bowl of citrus sections. Note that citrus can be cut well ahead of time, if it's refrigerated in a tightly covered container.

Stone fruit (peaches, nectarines, apricots, plums, cherries): Halve, pit, and cut into good-sized slices or chunks, as they'll fall apart if too thin or too small. If peaches have fuzzy skin and/or ar not organic, peel them with a sharp paring knife. The skin should surrender easily. Pit cherries with a cherry pitter. Wait until just before serving to cut and serve stone fruit. Once it's cut, it fades quickly.

Melons (other than Water-): For honeydew and cantaloupe (and other musk melons), use a straight-edged, very sharp knife or cleaver to cut off and discard the skin at the polar ends. Then stand the melon on one now-flat end, and carve (and discard) the skin from the sides. Cut the skinned melon in half, and use a spoon to scoop out and discard the seeds. Chop the remaining fruit into chunks of your preferred size.

Watermelon: If you're cutting a seedless watermelon, just carve off and discard the skin, then chop the rest. If it's the old-fashioned kind with seeds, after you get the skin off, use a spoon handle to scrape out the seeds along their seed pathway. (It's inexact, but do your best. No one will complain if a few seeds end up in the bowl.) When you're satisfied with your seeding, chop the rest and toss it into the bowl.

Pineapple: This will also be very juicy, so grab the towel and keep it with you. Use a straight-edged, very sharp knife to cut off he top and bottom (discard, discard) and then carve the skin from the sides. Be sure to cut far enough into the pineapple to get rid of all the deeply embedded prickly points. (Better to lose a little of the fruit, than to accidentally bite into one of these thorns!) Cut the pineapple in half lengthwise, and then again lengthwise into long quarters. Slice out and discard the core (a vertical strip of non-negotiable fiber) and then enjoy cutting what's left into bite-sized pieces.

Mangos and papayas: Slice before peeling, then peel the slices. The large mango pit is your snack for right now (you don't actually eat it, but it's fun to scrape off the mango flesh that adhered to it with your teeth) and the papaya seeds can either go into the compost, or into a fruit salad. They are edible. Peppery and crunchy, but edible.

Berries: Fresh berries are delicate, and thus do best if added to the top of a fruit salad or as a garnish. After the bowl is brought to the table, it's fine to mix them in, but do so gently. Raspberries, blueberries, and very small hulled strawberries can just go in (or on) left whole. Cut blackberries and larger strawberries in half. Ultra-jumbo hulled strawberries should be sliced.

Frozen berries (the unsweetened kind that come in a bag): A good choice for fruit salads and other purposes if fresh are out of season. In fact, frozen berries have an advantage over fresh. If you defrost them directly in the bowl you will be using, you will find that, as they defrost, they give off deeply pigmented, delicious juices that create an effortless "sauce." Great stuff for drizzling on French Toast or pancakes. You can also throw frozen berries (as well as other frozen fruit) directly into a blender, still frozen, when making smoothies with milk, yogurt or juice.

Kiwis and Bananas: Peel, slice and add these at the last minute, simply placing them on top of the fruit salad as you serve it, so they won't break.

Apples and Pears: Slice and add these at (or close to) the last minute, so they won't turn brown. To core an apple or pear, you can use an apple corer, or simply cut the fruit in quarters from top to bottom with a sharp paring knife, and then use the tip of the knife to cut the stem, scoop down and around the seeds, and cut off the blossom end of the fruit in one continuous cut.

Pomegranates: Pomegranates are a project, but well worthwhile. The trick is to liberate the beautiful, juicy jewel-like seeds (which are the only edible part) underwater, so you don't have to deal with the pith that surrounds them and likes to adhere. You don't have to put on a wet suit and jump into a tank, just fill a bowl with cold water, and perform your skin pulling-off and pomegranate pulling-apart seed extraction in the bowl. The best part: the seeds will sink to the bottom, and the pesky pith will float to the surface, so you can get what you need and discard the rest with little additional fuss. Drain and dry the seeds, and then toss them into a fruit salad, scatter them over a salad, or use them as a garnish for just about any dish to give it a splash of designer color.

Persimmons: Choose the Fuyu variety, which are crunchy when ripe, like apples. Simply remove the hull and stem, and then slice the flesh. Depending on how tender the peel is, and how thin